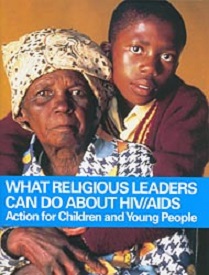 Spirituality and religious faith are a central part of the lives of many people around the world. Religious belief is often very important in supporting, inspiring and motivating people to cope with extremely challenging life circumstances, such as an HIV diagnosis or family bereavement.

But sometimes faith leaders and/or their communities have promoted obstructive or damaging beliefs. For example, the idea that prayer and not medication can keep a person living with HIV healthy has been damaging to many.
By contrast, many faith leaders are extremely active in preventing HIV transmission in their communities, educating people and challenging the stigma and discrimination faced by people living with HIV.

How can Stepping Stones help?

The Stepping Stones programme builds on the many similarities which unite us around the world, rather than on the fewer issues which divide us. It does not adhere to or promote any particular religious faith. Instead it maintains a strong spiritual theme of one common humanity and mutual respect and support throughout. It has thus appealed to and been used successfully by many organisations of differing religious faiths around the world. These include Catholic, Protestant, Muslim, Hindu and Buddhist communities, as well as people with indigenous faith systems and people who are atheist or agnostic. The original Stepping Stones workshop took place in a community where participants included Catholics, Protestants, Muslims and people of indigenous faith, all working together in harmony.
Below are some suggested resources regarding HIV and faith.