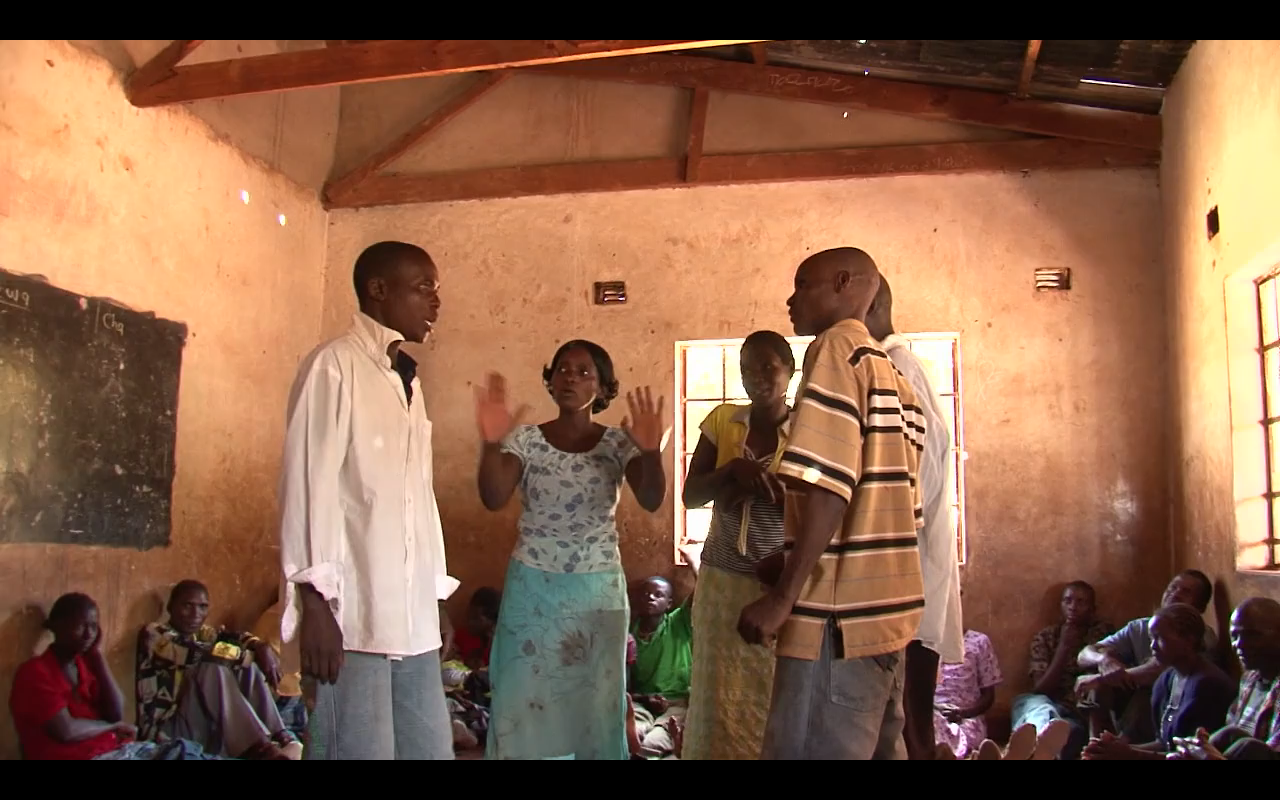 In April 2013, Salamander Trust and the Coalition of Women Living with HIV in Malawi held participatory filming training workshops with members of the Coalition, their male partners and other community members. The workshops were led by Dr Dominique Chadwick of Social Films, who is an anthropologist, fim-maker and film-trainer. The following films are the result of these workshops. They represent the experiences and understandings of the participants, in relation to issues related to HIV, sexual and reproductive health and rights (SRHR), livelihoods and gender based violence (GBV). (Or click here if you want to order multiple copies of the DVD and accompanying booklet, or to request free copies.)

NOTE: if you are fortunate enough to have strong enough internet to watch these films online, please consider donating to our “Bridging the Digital Divide” appeal, so that we can also share them in hard copy with those who also want to see them but can’t! Every little helps and we – and the recipients – will be most grateful to you!

How did the process work?

Several training workshops were held over a 2-week period with groups of 8 women (COWLHA members), 8 men (their partners) and 8 youth from the local community and friends of COWLHA. Both the men’s and women’s groups have participated in Stepping Stones workshops run by COWLHA. Each of the three groups listed above were given a separate three-day workshop in participatory film making. Each time, the eight participants were taught how to use “flip” video cameras and trained in basic filming techniques. They reflected on how stories can produce and convey messages to their audience. The eight participants were split into two sub-groups of four. They were encouraged to reflect on the impact of issues such as HIV and gender-based violence in their own lives and asked to share a story relating to this with the rest of their group. During a collaborative process of discussion, one story was picked for each sub-group of four people. Participants were encouraged to look at their stories as powerful tools that could convey messages, raise awareness and advocate for change. They were trained to storyboard their film and organise each shoot with the participation of local members of the community as actors. The participants were entirely responsible for the choice of topic, storyline, message, content and dialogues of their films. They were also trained in these groups to edit their own films. Overall six participatory films were made, two films for each of the three groups.

What is participatory film making?

The participatory film making workshop facilitators engage the participants in a course of active learning of new skills and encourage them to develop upon their existing competencies. Participatory film making is designed to be a creative, enabling and empowering process. It brings together groups of people to engage and reflect with ideas through the medium and practices of film making. Participants were involved in each stage of the production of the film – from conception to development to filming to editing and beyond.

The film making process enabled a reciprocal process of learning for Salamander Trust and the participant film makers. Whilst the film trainers imparted the participants with the technical skills and the means to create videos, Salamander Trust was able to learn, through the workshops, about the issues that are important to these communities and to better understand the real effects of the Stepping Stones programme on their lives. The principal objective of the training was to enable the participants to use film as a powerful and sustainable form of advocacy and to support them to go on to engage local audiences in Malawi with some of the issues addressed in their films. These included HIV, gender-based violence, sexual and reproductive health and rights, livelihoods and all the relationship and communication skills needed to navigate these issues throughout their lives. “Video provides opportunities for those with poor or no reading and writing skills to record and to review, and to revise and organise what they have recorded, before using it to represent their views to others.” (Braden, Su, 1999)

How best to use the films

How do we understand stories? How can we use them to open ourselves to new understandings and perspectives? In order to help audiences to reflect upon and challenge their own interpretations of the videos, we have devised some suggestions for resources to accompany the films. We know that conversations about HIV and the associated issues are hard, sometimes very hard, to initiate. We hope that these videos can act as a tool to encourage discussions and new ideas in a community setting. The questions were specifically designed to initiate positive and constructive dialogues based around the issues that are raised in the videos. They provide an opportunity to think in constructive, holistic and creative ways about some of the problems and unresolved tensions highlighted within each story.

Filmed and edited by a group of four women, all members of the Coalition of Women Living with HIV and AIDS and participants in the filming training workshops.

Chisomo is an orphan. She has become responsible for her two younger siblings, yet she cannot afford to feed them. When she meets an older man, who offers to marry her and look after her and her siblings, she says yes without hesitation. Sometime later, we see that her husband is violent. He did not keep his promise to look after her family. Also, Chisomo feels unwell and her aunt convinces her to go for an HIV test. She is found to have HIV and attends a COWLHA support group where she finds support and help. COWLHA talk to Chisomo’s husband on her behalf to help him to understand why it is important that he also go for a test. He ends the film by stating that he will look after his whole family, including Chisomo’s siblings.

Some questions to consider:

Filmed and edited by a group of four women, all members of the Coalition of Women Living with HIV and AIDS and participants in the filming training workshops.

A pregnant woman argues with her husband because she wants them to get an HIV test together. She cites his behaviour (drinking and staying out late) as the reason for this. At first the man doesn’t want to go but a COWLHA member convinces him that it is important for the future health of his wife and baby. The man and woman go together to the clinic to be tested. The wife is found to have HIV whilst the man is found to be HIV negative. At first the husband and his family want a divorce – but one of his aunts convinces them that this is not the right path of action. Later, the wife is seen selling groundnuts on the road. Two local women who have heard rumours about her HIV status will not buy from her. They mistakenly believe they can acquire HIV from the nuts that she has touched. However, a COWLHA member comes to educate them otherwise. After learning the facts, the two women are happy to buy groundnuts from the seller.

Filmed and edited by a group of four men, all of whom are partners of members of the Coalition of Women Living with HIV and AIDS and participants in the filming training workshops.

A wife hides money from the sale of their chicken from her husband. Angered, he beats her until she hands over the money. He spends the money out in bars, drinking and dancing with other women. Later we find out that both the wife and husband have HIV. As a result of the diagnosis, the wife is discriminated against by the village chief. COWLHA intervene and advise the chief about why he should alter his behaviour. The chief agrees. The man and the woman are seen to be happy at the end of the story, planning their future finances together.

Filmed and edited by a group of four men, all of whom are partners of members of the Coalition of Women Living with HIV and AIDS and participants in the filming training workshops.

A young girl is attacked, on her way home from school, by a young man. She runs home to tell her father what has happened. Her dad tells the police. Together with a policeman they capture the abuser. The father tells everyone in the community about what happened to his daughter. A community member tells the local children that it is important and brave for children to tell adults when they experience sexual abuse.

Filmed and edited by a group of three young community members and a local healthcare worker, all participants in the filming training workshops.

Two children stumble upon an uncle attempting to rape his niece. They save the girl just in time and take her back to her mother. They try to warn other girls to be careful. The boys have a discussion in class to understand why rape is wrong and destructive.

Let’s listen to each other

Filmed and edited by a group of three young community members and a local healthcare worker, all participants in the filming training workshops.

A boy tells the story of his uncle, Sayikonda, who was a successful businessman. However, he started to have sex with sex workers and to drink heavily. His sister tried to warn him away from these activities but he ignored her because she was living with HIV. Sayikonda eventually lost all his money, acquired HIV and later developed AIDS – from which he died. Young people discuss the effect of this story upon children.

These are just our suggestions. If you have other ideas about how best to use or support these videos… do please let us know! We look forward to hearing from you.

As well as the participatory films, film maker Dominique Chadwick of Social Films produced a documentary.

“I used to abuse my wife when she went to the hospital to collect her ARV treatment because she came back late and I didn’t like it. I stopped the abuse after COWLHA members came to my house to counsel me that what I was doing was violence”

The film is also available to view in french here.

Members of the Coalition of Women Living with HIV and AIDS in Malawi (COWLHA) and their partners meet to talk about how they used the Stepping Stones programme (published by Strategies for Hope), to overcome gender-based violence, improve communication and relationship skills and restore peace and prosperity in their families and communities.  The film highlights the importance of developing good gender relationships through negotiations around money, medication and condom use in the context of HIV, GBV and SRHR.

Order the DVD and Accompanying Booklet!

To order the handbook and enclosed DVD, download the following order form by clicking on the red resource link below. This will open up the order form as a word document. Complete and email it back to us at: malawidvd@salamandertrust.net.